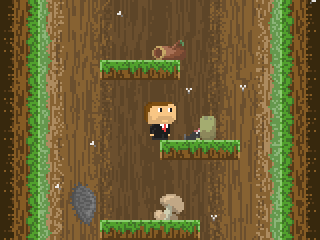 
Stage two is almost ready--the stage itself and the victory sex sprites are done, but the enemy is missing. I'll have to take the next few days off, since I got a ninja offer to design an online footwear store, and money's tight right now so I couldn't say no. My point being--if there's any nature-themed enemy you'd like to see in this stage, now is the time for suggestions. The only restriction is that it has to be a flying enemy. Personally, I'm thinking either bee or butterfly lady.

So anyway, the game is in its final development days (as in the whole game). From here, I don't have to write any code in addition to what I already have (unless something breaks again), nor do I have to produce any sounds or design anything. Now I only have to draw and, well, that's it, so it's downhill from here. For the past week I was also handling stuff on the business end--I'll rather take care of this now, so that I don't make any stupid mistakes once the game is ready and I'll be all like OHMYGODOHMYGODOHMYGOD about publishing it within the next five minutes.

Posted by cheshireCat 6 comments:
Email ThisBlogThis!Share to TwitterShare to FacebookShare to Pinterest

Progress report and some random thoughts


Since my last post, not much has changed content-wise. I'm done with the whole engine wrap-up, so all the insignificant technical stuff and the last handful of features (checkpoints, image-form dialogs) are finished. I also did a lot of under the hood work, since some bugs I thought I've fixed long ago popped back up after I finally had the chance to test the game on systems different than the one I work on. These were bugs associated with the sound extension I was using, and after some days of trying to fix them while desperately struggling to cling to OGG files, I finally had to bend over and revert to WAVs and the awful GM sound system. What's left for me to do before I can release the final demo is basically add a few more random dialogs (should be finished today), find a guy to translate the readme file to japanese (if you know someone who's still good but cheaper than 0.12$/word, I'd really appreciate it if you'd post his contact information), and draw all the graphical content for stage two.

Speaking of poor time management--I wanted to have the whole game ready for a mid-july release, and I doubt I'll even have the last demo up by then. I kept up to schedule only until the avalanche of bug reports started when I made the first demo public. Fixing parts of the code, then rewriting from scratch, only to have to fix it again--that was a huge bite taken out of the time I had reserved for the game's development . I'm still financially set only for the next two months or so, with no sign of any contracts heading my way anytime soon, so I'll really have to release the game in whatever form I'll have it in by the end of august. This basically means that I have to cut down the workload, and because I'm doing everything myself, I can only do that by scratching things off the todo list without implementing them. That, or implement everything without polish, which is basically a trend in hentai games, but it's against my ideology as a designer, so I'll keep the content to a minimum and stick to my usual routine of overthinking and polishing the shit out of every detail--hard numbers, once the game is up for sell, will show whether this concept also works with hentai games (which is very new to me, so let's call this game an experiment). The gameplay sticks out on its own already, so I don't think I have to make the box as overcomplicated as I planned to. That being said, stuff like story elements, cutscenes, climax sprites being able to stand on their own (the ones in the demo were initially only placeholders, but it seems they're staying) won't make it into the final cut.